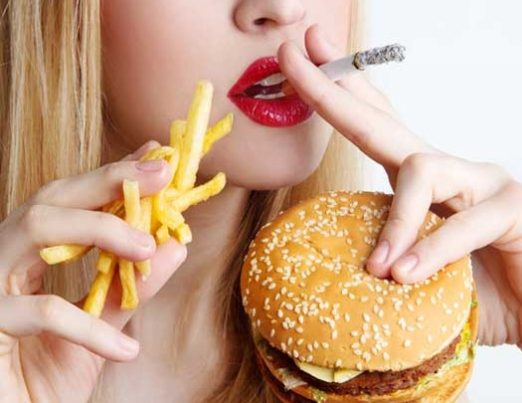 It’s funny how most Americans are completely fooled by the choices we are presented regarding conventional foods. If we are seeking to be healthy or become healthy, we are told by seemingly caring organizations, associations and regulatory agencies to seek out “low sodium” products, “wholewheat” bread, “fat free” dairy products, lean or “prime cut” meats, “sugar free” sweets, “low carb” entrees, and the list goes on and on. See anything horribly wrong here? There is no mention of avoiding dangerous pesticides, iodized and radiated salts, glyphosate-ridden wheat, bleached products, hormones in meat and dairy, antibiotics in meat and dairy, artificial sweeteners, heavy metal toxins, dangerous industrial food dyes, GMOs, toxic gluten or even high fructose corn syrup.

Does it really matter if your gluten is wholewheat, when it’s going to clog up your intestinal tract and cause other food to rot in your body after 24 hours? Does it really matter if you use skim milk or “low fat” milk in a recipe, if that milk contains blood, pus and pathogens from the confined animal feeding operation (CAFO) where the cows are abused, shot up with growth hormones, have infected udders from being forced to produce too much milk, and are fed antibiotics to stave off bacterial and viral infections? Does it really matter if you use less sugar, when that sugar comes from genetically modified corn that contains pesticides that cause cancer and diabetes? What good is a “healthy heart” if you’re dying of cancer and Alzheimer’s?

Not so “heart healthy” recipes for new health disasters, as recommended by AHA on their very own website

#1. The “Summer Veggie Pizza” – Sure, it starts off healthy with a crust made from cauliflower, but then it all heads downhill from there. The American Heart Attack Association wants you to grab four conventional egg whites that probably contain hormones and antibiotics and come from hens that ate genetically modified feed. Then it’s time to add 1/4 cup of “fat-free” mozzarella cheese (more dairy to boost your inflammation and clog your arteries, and “fat-free” doesn’t help anything, by the way). Of course, you’ll need two teaspoons of canola oil, that comes from toxic rapeseed oil, an industrial oil that’s GMO and coagulates in your blood to cause the one major health problem and number one killer in the USA that the entire AHA claims to be trying to prevent.

#2. “Baked Oat-Crusted Chicken Fingers” – No, chickens don’t have fingers, but they do use their claws to catch and eat cockroaches, or didn’t you know? The AHA wants you to grab 1 1/2 pounds of non-organic chicken that’s most likely coming from the CAFOs of America, and then add 1/2 a cup of sour cream from some tortured, infected cows also living in CAFOs. Then, of course, the AHA says to add two packets of artificial “no calorie” sweetener. That means you’ll probably be grabbing some aspartame or sucralose, both of which are toxic to the human body. Add some fiber heavy oats that are coated with carcinogenic glyphosate and voila! Nothing like straining your heart with some chemical-laden food that’s concocted in a make-shift laboratory you call your kitchen.

#3. “Broccoli and Cheese Egg White Scramble on Whole-Wheat English Muffin” – Yes, you’re going to want to get some broccoli into your weekly food regimen, but not lumped together with a bunch of junk science, heart attack brewing gluten and cheese. Again, the American “Hack” Association wants you to eat lots of digestive-tract clogging, glyphosate-ridden gluten (two wholewheat English muffins) – that should put a nice strain on your heart, when you’re obese and suffering from diabetes and cancer. Don’t forget to add the AHA recommended CAFO cheese and milk! They even recommend adding some tap water, and we all know what’s in that.

As the Fluoride Action Network warns us:

Our study shows that the severity of skeletal fluorosis is directly related to the severity of abnormal cardiac function, as demonstrated by the electrocardiograms. The results show that fluoride in drinking water consumed over time is harmful not only to bones and teeth but also to the cardiovascular system. …

#4. “Beef Sliders” – Get ready to suck back some CAFO cow and lots of toxic gluten, and then sit back and wonder how the association that was created to supposedly save you from a heart attack helped make you obese, diabetic and cancer-ridden. First, you’ll need to grab 3/4 of a pound of “extra lean” dead cow meat that you will be adding to eight wholewheat gluten nightmares (buns). Add some peppers and cheese and then sit back and look up some heart-clogging recipes for dessert as presented by the American Heart Attack-Promoting Association, that never ever mentions organic food, filtered water, or natural supplements for heart health and lowering blood pressure naturally, like CoQ10 and Hawthorn extract.

Would you like some recipes that are actually healthy and good for your heart? Try NaturalPedia.com and you’ll awaken your senses while keeping your blood flowing properly. Healthy never felt so good.